I was quite pleased when Apple chose to break away from Google. The steady infiltration of sponsored, and inaccurate information on Google Maps really bugs me.

I also didn’t join the chorus of deriders of the new Apple offering, because I remember how woeful the Google maps were when they were new.

But now I have my own thing to whinge about. 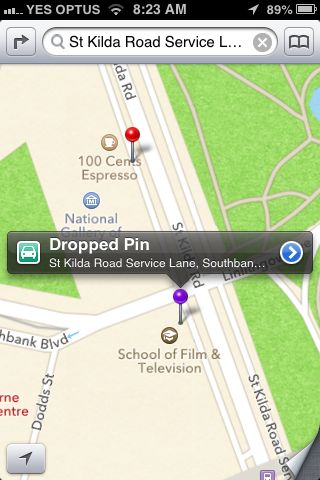 I was arranging to pick my daughter up after a theatre performance in the city last night, so as part of the text messaged arrangements, I dropped a pin on a map and shared it with her. All arranged, I thought.

Then, much closer to the time, I just had one of those moments of doubt, when you recheck your arrangements, so I tapped on the dropped pin myself, just to see where I’d said we’d meet. I was more than a little horrified to find that it was almost 200 metres (the red pin on the screen grab) from the spot I’d pinned. Even worse if I’d sent it by email, as then the maps.apple link loads google maps on a desktop, which just drops a whole mess of pins over a spread of about 5 kilometres! Utterly useless either way if you’re trying to meet someone in a busy city in the dark.

Curiously, the link actually includes the correct latitude and longitude coordinates, it’s just that it also includes automatically geocoded street details. Stupidly, both Apple and Google prefer the street address to the coordinates. Just changing the structure of the Dropped Pin link would yield a much more accurate result.

Hope they fix that one real quick, because it’s going to cause a lot of people to get very pissed off waiting for their friends on the wrong street corner!