This week Google announced (yet) another new feature of it’s mapping toolset. For a little while now, we’ve been able to ‘submit’ alterations via the maps interface – moving things here and there – a quick look at Google Maps Recent Edits shows that it’s quite popular. The latest thing is Map Maker, which is a bit like My Maps, except your edits may eventually find their way into the public maps.

Nice idea, but if you have a close look, you don’t get a lot for your efforts. Pan around google maps and you’ll see the copyright message in the lower corner that attributes the data source of the various providers, but don’t expect to see your name there any time soon… no, if you submit data via mapmaker (assuming you are in one of the areas currently open), that’s the last you’ll see of that little piece of intellectual property. Furthermore, if your edits ever do make it to the public maps, they’ll be under the same restrictions as all the commercial data. Google might be touting this as some kind of community effort, but it aint.

Contrast their approach with that of Open Street Map: an active supportive community; great editing tools; open to anyone; your edits appear on the main map within a week; infinite detail; the list goes on. Sure OSM doesn’t yet have the detail of Google in all areas, but where the community is active and strong, the data is way better than Google’s. 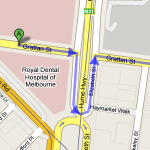 Just around the corner from my work is an example. The Elizabeth Street roundabout is one of the busiest intersections in Melbourne. It’s daunting enough for locals, but if you’re from out of town, it would help to have a good map. Superficially, OSM and Google are similar, but if you look closely you start to see the problems:

Anyway, the point of this is not to bag Google maps – they are fantastic, they have popularised digital mapping and changed the way we get from one place to another… but, they are still a company and you we still rely on them to provide the service and the tools to go with it. OSM on the other hand is open source – the data is there for everyone to use – tools can be created, crafted, improved and distributed without messy licencing. Wikipedia was recently shown to be every bit as comprehensive and accurate as the venerable Encyclopaedia Britannica and so it will be with OSM. It will be the mapping tool by which all others are judged. So if you’re thinking of making maps – do it the open way!