Recently, the enormous and daunting (for cyclists) Haymarket Roundabout in North Melbourne was refurbished to provide better traffic flow and greater safety for cyclists. Mostly, I’d say it’s been a success.

I ride through the roundabout every day, but only from Royal Parade to Elizabeth Street, hardly ever the other way. If I did ride the other way, there is something that would bug the hell out of me! Take a look at the following image.

On the left is an image taken from the planning document distributed by Vicroads, showing graceful, smooth, constant radius curves for cyclists travelling north into Royal Parade, but the aerial photo from Nearmap’s recent release shows clumsy straight lines and zig zags… what happened? The rest of the works are an almost perfect rendering of the plan, but this little bit looks like it was done by the work experience kid! The car lanes are all over the shop too!

Try this view of the actual path, overlaid on the original plan, I think it shows the problem for cyclists even more clearly. 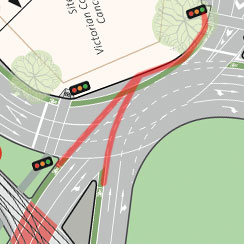 What this anomoly means is that cyclists are forced into fairly dangerous maneuvers and sharp changes of direction in an area that is already pretty full of things to watch out for. Clearly, something went wrong with the execution and VicRoads just need to fix it.

One reply on “smooth out the haymarket kinks please”