Nokia today launched it’s OVI store, an attempt by the company to jump on the tidal wave of success that is the Apple Store (along with about a half a dozen other imitators). Many industry pundits are touting it as some sort of competitor, but I’m afraid that’s an uphill battle, and one they’re never going to win – not by a long shot!

Being a Nokia owner myself (can’t afford an iPhone and detest the G1 hardware!), I hopped onto this new store for a look around. Nice simple interface, quickly got me browsing apps that suit my hardware – applause for the use of html/css instead of flash – obviously this is driven by the need to work on the browser in their phones, but a nice touch anyway. 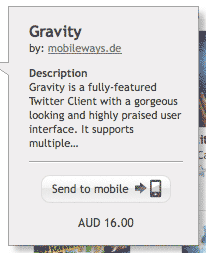 Unfortunately, it all fell apart when I saw the prices! Who are they kidding? A game like Touch Physics on the iPhone costs $3.99 and gives hours of gorgeous, fluid gameplay. Games on my Nokia feel pathetic by comparison, yet on OVI store I’m being asked to fork over between $6.60 and $12 for crummy games that bore me after 5 minutes! Then there’s some ‘City Guide’ travel apps which are (probably not) selling for over $30! They want $16 for a twitter client?!? You have got to be joking!! Who is making these pricing decisions?

Lonely Planet city guides at least represent fair value at $8. Weirdly, this compares favourably to the same guide on the App Store, which can be had for $18.99. Perhaps this is an acknowledgement of the distinctly poorer user experience offered by Nokia’s hardware… who knows?