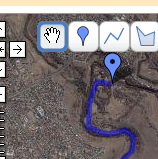 Google’s most revolutionary tool, Google Maps, has just added a new feature – My Maps – which brings ‘mapping’ to the masses.

It is brilliant. You can create maps, draw shapes, make points, add html features such as photos. Sure, there are dozens of tools out there already which allow similar capabilities, but Google, in typical style, have created the basic flexible framework which will see the widespread adoption to make it mainstream. And… the really neat part for me is the ‘KML’ link, which downloads a kml file for Google Earth.

What’s so good about that? You can do all the drawing and mapping in GE, but you can’t manage a web repository of your files – that’s the beauty of ‘My Maps’.

Once I have my KML file I can use GPSBabel to convert it to GPX and upload it to my Garmin eTrex. So, effectively, ‘My Maps’ is now my web based respository of GPS data!

To give it a road test, yesterday I mapped out the route from Maribyrnong park to Brimbank park along the Maribyrnong River. This ride is part of Bicycle Victoria’s ‘Bike path discovery’ program, but you don’t need an excuse to ride it – it is a beautiful track. Anyway, the mapping worked perfectly – I was a happy (and tired) cyclist by the end of the day.

Wishlist: I won’t consider it perfect until I can import kml or gpx I’ve created elsewhere. As it matures, I’d also like to see fuller support for GPX, such as perserving icons etc. but that’s secondary.

Recommendation: get out there and start mapping – I think we’re about to see mapping and mashups go seriously mainstream!

I can even view my flickr stream as GeoRSS in Google maps!