…there’s another one? I hear you gasp! Yes, it seems the old one about imitation being the sincerest form of flattery has struck a chord at streetdirectory.com.au – and they obviously love Google! 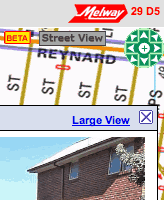 This is sort of amazing to me – I mean it’s incredible enough that a giant corporation like google pushes forward with a program of driving a car down every little lane and street in town and then stitching together the visuals, now we’ve got our own home-grown version!

Try it out at this intersection in Brunswick. Wierdly, that link, which I copied from the ‘send a link’ tool on their site, ends up displaying a street 300m to the north, so there’s obviously a bug or two there, but ignore that and start counting the similarities.

OK, so I’m a big fan of the Melways street directory: it’s a great publication and I’ve worn out more copies than I can remember – they draw great maps. Due to peculiarities of projection, it’s never translated comfortably to the online version, but this latest venture just seems preposterous – especially when it’s been released with so many shortcomings. Isn’t there some business rule about playing to your strengths?