This week has been a big one in the mobile phone world. Debate about the iPhone and the plans available to use here in Australia has been everywhere. At the same time, however, Telstra has been heavily pushing its venture into barcodes with the introduction of QRcodes to the Australian market.

I say introduction because that is the word Telstra are using, but in reality the technology is not theirs and has been around and freely available for download and use on java capable mobile phones for the better part of a year. They are characterising it as some sort of breakthrough, but of course, it’s not.

That’s not to say I don’t think these things have merit – I believe the concept is great, in fact, I use it regularly at work when testing sites on mobile phones and I don’t want to type in long URLs on the keypad, I just load up a code, snap it with the camera straight from the screen and it takes me there.

What is not well known is that there are two commonly used types of code: Semacode and QRcode, both seem to do the same thing and there’s no reason why you can’t have both readers on your mobile phone, so I am curious about the pros and cons.

QRcode seems to be the underdog, being mostly confined to the Japanese market and (in my simple test at least), almost half as efficient as Semacode in rendering a URL (841 pixels vs. 484 pixels), but it still seems to work well though in use, I find Semacode better. 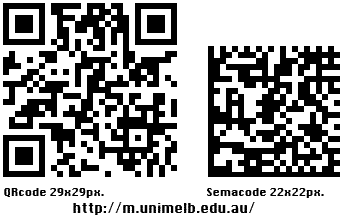 Efficiency is a key factor for usability where conditions are less than ideal – dodgy cameras, poor lighting, movement and parallex – all make it harder for the software to recognise the patterns, so it’s a given that the less pixels you have to capture and interpret, the less mistakes you will make.

Semacode also seem to be doing interesting things with Social Networking tools and have a Facebook app, so you can generate your own personal card that others can ‘grab’.

The good news is that you don’t need to make a decision. Telstra are saying in their ads that you ‘get the software from your Telstra dealer’, like it’s some exclusive deal, but in reality you can download both readers freely: I’ve been using the readers from Semacode and Kaywa, but I’ve just found this one called beetagg which apparently reads both.

You can also create codes easily, with loads of open source libraries and online tools, once again from Semacode, Kaywa and there are generators that do both from Nokia and Beetagg.

5 replies on “Semacode vs QRcode”